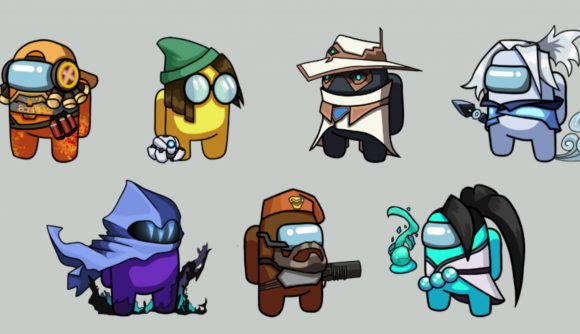 Cutesy redesigns of killer videogame characters are always good fun, but there’s just something extra special about seeing battle-hardened badasses reimagined as Among Us crewmates. The latest game to get such a treatment is Riot’s Valorant, whose roster has been redesigned by artist and Reddit user Novazan in the style of Innersloth’s social deduction megahit.

It’s impressive to see how well Novazan has captured each character’s distinct look. Thanks to some smart, simple design decisions, they’re all instantly recognisable while still fitting the Among Us aesthetic to a T. If you want more of where that came from, the game’s subreddit is frankly bursting with impressive fan art, such as this “Japanese inspired” redesign that recently did numbers.

Among Us continues to be one of the most widely played and discussed games of the year, having amassed over 100 million watch hours on Twitch throughout October.

Last month, Innersloth released a teaser image for the new Among Us map, which seems to be a “Henry Stickmin themed location”, inspired by the developer’s earlier choose-your-own-adventure series of the same name.

A full reveal looks set to arrive at The Game Awards 2020 on December 10. Unsurprisingly, Among Us has been nominated in both the ‘Best Multiplayer’ and ‘Best Mobile Game’ categories.